Interesting article on how the mainline media distorts or does not report on Right to Life marches and protests.
Link to article

A Christian businessman has put up a number of billboards, check out his website and watch the professional YouTube videos. 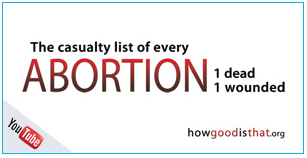 An amazing short film called ‘A Story about LIFE’ has been produced by Pro-Life Victoria (by Parham Media).

The film highlights the vote by the Victorian parliament on the Abortion Law Reform Act in 2008 that legalised abortion in Victoria. The film features Melissa Ohden, a US woman who was born alive after her mother had an abortion – visit her website. It also features Peter Kavanagh, a DLP Member of Parliament who explains what the abortion law includes.
There is a 12 minute version – as well as the shorter, 4 minute version above for those who want to show it in churches in the lead up to the Victorian election on November 27, 2010.

View the 12 minute version of ‘A Story about LIFE’

For more details, including votes on amendments, visit the Life Vote website.

How low has our society fallen when we advertise abortions, admittedly this is not Australia but how soon will we follow? Read the article by Ed West, a journalist for the British Telegraph. Link

Here is a video that demonstrates the extreme bias of the mainstream media.